It all started with a steamy hot mug of rooibos tea. Except rooibos tea is poison. Poison!

It also started by forgetting that the last time I drank rooibos tea I literally ended up in a British hospital. But whatever happened, the night I arrived back at work after my little Canadian adventure, I drank SO MUCH rooibos tea.

What followed, was more than ten days of pure tea-induced hell.

On Day 1, I treated it like a joke, explaining to my safari guests that I had a ‘tea hangover’ and that normal service would resume shortly. This leads me to attempted remedy number 1…

We smoked elephant poo on game drive. This is an actual thing. Yes, setting fire to dry(ish) elephant dung and inhaling the smoke is meant to cure all sorts of ills. I don’t think my guests were particularly convinced, but humoured me none the less in my quest to beat my rooibos tea hangover. 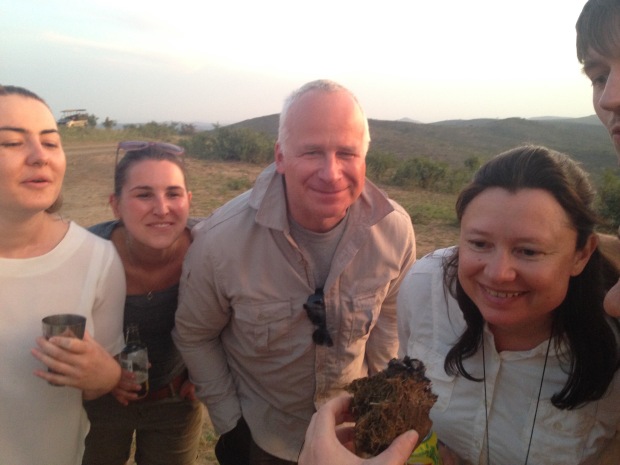 Why should it work? The theory is that elephants eat a lot of sickle bush (Dichrostachys cinerea), and that sickle bush has lots of lovely healing properties. Pair that with the elephant’s awful digestion system where everything just comes out the same way it went in, and you might be on to something.

Mid-smoke, one of my guests asked why I couldn’t simply smoke sickle bush. She had an excellent point…

By Day 2, I was feeling worse. Much worse. Let down by elephant poo. So I took the direct sickle bush route. I’d done some research first and decided to drink rather than smoke. So during our drink stop, I gathered some fresh sickle bush, boiled it for a while and strained it. I drank the resulting ‘tea.’ Again, an observant safari guest pointed out that I may have taken the leaves from too low on the bush, meaning I was likely just drinking re-animated rhino pee. Sickle bush tea? Doesn’t work.

On Day 3, I found myself at Hilltop camp for morning coffee stop. I snuck into the shop and … they sold Med Lemon! In cute little individual packets.

“Oh my goodness, give me ALL of your Med-Lemon,” I asked the cashier. She obliged. There were little sachets of Med-Lemon all over the counter.

Ah! Life giving Med-Lemon! Nectar of the gods. Anna can now feel strength and renewal flowing through her.

Except, I don’t bring money on game drives. Why would I? No money, no Med-Lemon.

Later that night I drink a ‘Hot Progress’ cocktail; it’s got lots of vodka. And lots of chili. Amazingly, it doesn’t work.

Day 4: Today I pulled up to a whole herd of sleeping buffalos on game drive. I sneezed. Twenty buffalos scattered in every direction.

On Day 5, one of our team is going to town! He can bring me Med-Lemon! He forgets.

On Day 6, one of our team is going to town! Again. He can bring me Med-Lemon! Again. He forgets. Again.

we got a good fire going…

On Day 8, one of my guests takes pity on me and asks me to gather baking soda, fresh lemon and boiling water from the kitchen. We spend the next half an hour together sitting under the stars and giggling while I gargle the mixture and occasionally drool it down into my jacket. For once, I feel some actual relief. Repeat again the next morning. Again, some relief before game drive.

Day 9. The lodge finally sends for some Med Lemon! I order two whole boxes. That should get me through the next few days. Hooray! Med Lemon arrives while I am on game drive. All but two packets are stolen by the time I get back.

Day 10. I am rationing my two packets of Med Lemon; waiting until the moment that I really can’t live without it, and then BOOM. I’ll take the Med Lemon.

What I’m trying to say is that it sucks to be sick out in the bush. And sometimes nature doesn’t have all the answers. And don’t smoke elephant poo. And if anyone wants 120 bags of rooibos tea, please let me know…