I still hear it way too often – “Our safari was ruined by the rain.”

Noooo! This makes me so sad. Soooo sad. Check out all the ‘o’s.

It makes me sad because there’s no reason to let your safari get ‘ruined’ by a little water falling from the sky.  Sure, if it’s really rained hard and all the local rivers are flooded and you can’t get anywhere and the water is approaching the lodge at an alarming rate and you need to be helicoptered out from the roof (happens) then yes, you can stand up and say that your game viewing experience has perhaps been affected by the rain.

But a few rainy game drives? Embrace them.

Take this morning as an example. When wake up call rang around the lodge at 05:30, it was raining. Some guests opted not to go and slept instead. Others wanted to ‘wait it out’ and see if it would die down. More chose to leave an hour later. And then there were the ones who just wanted to get out there, curious to see what a rainy Africa would throw at them. The ones who braved it in the end, got thoughouly soaked. And you know what? Half an hour after we’ve all got back to the lodge, they’re dry, happy and eating chocolate croissants.  Not only are they full of bacon right now, but they’re full of memories too.

First sighting of the day was the wild dogs. There are only about 300 of Southern Africa’s rarest predator left in Kruger.  Seven of them were right there on the tar road, in the rain, going about their business. Wild dogs are unstoppable. At least they were until they were chased off by a dazzle of zebras… 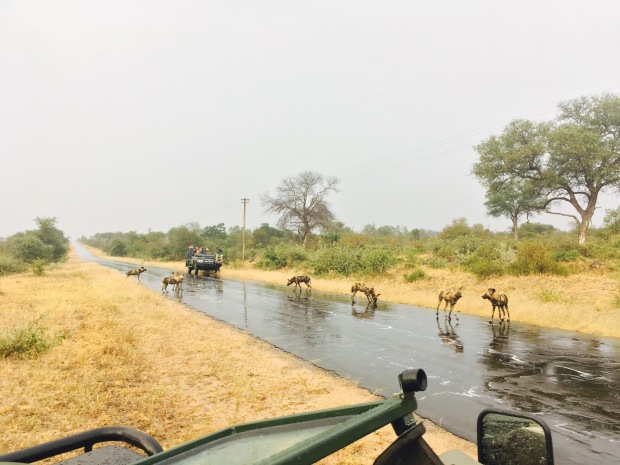 Next up we’re the tortoises. Leopard tortoises take every opportunity to take in some water, and rainfall on a tar road is like winning the lottery. Water everywhere. Score! And there were tortoises aplenty sharing in the winnings. Ask any animal and they’ll tell you how nice it is to drink water from a tar road. It’s as clean and fresh as they’ll ever find in nature.

Then there were the elephants. A bunch of teenage boys knocking each other around. When you’re there in the middle if it, it’s something you won’t forget – ivory smacking against ivory with a few tons of force makes an almighty sound.

Oh, and then there was the leopard that we followed through the bush and watched stalk and chase a squirrel. She pounced straight through and up a small knobthorn tree, but had no luck this time. It just went to show what opportunists leopards are. They’ll try and catch anything from spiders to small giraffes. Cats can sometimes be a little harder to find in the rain, but this lady proved that it’s totally possible. 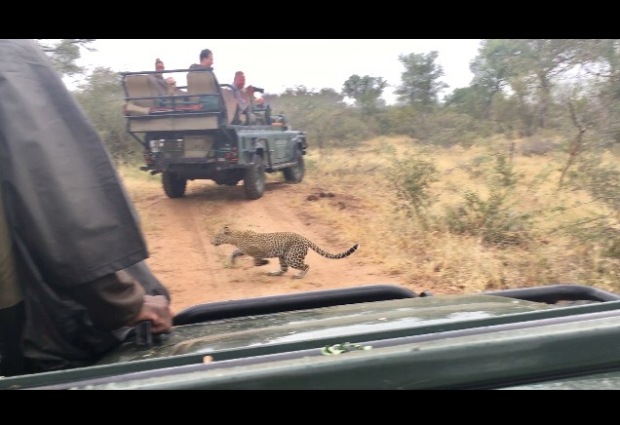 All of this happened in the rain on a day some would be inclined to brush off as ‘ruined.’ This is just one rainy game drive. I’ve been on countless ones and each has its own story. Trust me, when safari is happening all around you, you’re not going to notice that your hair’s a bit damp or your canvas bucket seats have turned to puddles.

What you experience on safari isn’t actually determined by the animals you see; it’s directly determined by the attitude you bring. When it comes to rain, I’ve always lived by the philosophy that everything wet eventually dries. Simple. The possibility of having to sit in the rain for a few hours shouldn’t be enough to deter you from seeing something life-changing out here in Africa. Love.
Hoofnote: and sometimes mornings like that lead to sunsets like this…